It is no secret that I love Christmas. It should come as no surprise then, that when I began to see the recurring trailer for Last Christmas, featuring Emilia Clarke and Henry Golding, that I would do everything I could to watch it in theaters.

You know the one. It begins with Wham’s hit (do you even know how many times I googled who the other half of Wham was and still do not remember?! Ridic), sung slowly by Emilia who is forever the Mother of Dragons in my heart. You see her ice skating with Henry who is my second fave because Crazy Rich Asians (#duh). In four seconds it was the trifecta to convince me to throw money its way. It centering around some Christmas theme was extra. Literally neither here nor there. I was always going to want to see it.

I dressed up for the movie, by which I mean I donned my Christmas dress that sparked a movement (if you’re wondering what movement I mean, here it is: Christmas Dress Shenans), complete with accessories and my gingerbread house purse. It was the most justice I could do for this feature film. I was giddy excited and hardly noticed that our fellow attendees had an average age of 65 at the cinema. That is just what you get when you choose a Sunday morning matinee time. I have to add that it made for some interesting chuckles during some exciting trailers, but that’s for another day.

As the movie began, it occurred to me that I really had no idea what it was about. My best guess at the time is that it was a typical holiday RomCom that just happened to go straight to the big screen because of its clear A list of actors. Well, buckle up and let me add that no, there will be no major spoilers here. Just me listing out all the reasons why you need to go see it, even if you hate Christmas.

Here you go, without further adieu: 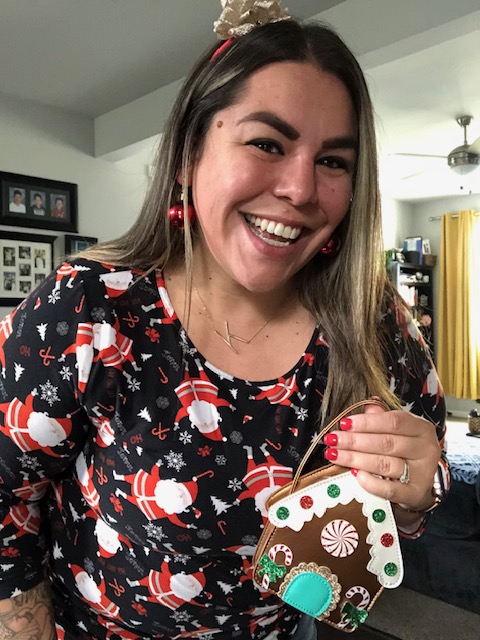 Ready to watch some magic!

Within five minutes of the movie starting, you realize that Catarina (played by Emilia) is a hot mess. She works at a Christmas Wonderland, which is actually now a dream for me, perpetually wearing a green elf dress. Her accessories are now legitimate wants of mine. The boot cover-ups to make them elf shoes are the best thing ever. I need a pair like I need oxygen! She is an adorable wreck. You love her instantly, even when you are cringing as she makes continuous bad choices.

She sings. This is no spoiler, as we heard that in the trailer and when she meets Tom Webster (played by Henry), he begins to help her overcome some challenges she has in nailing auditions. And, ya know, being a better human. Suffice to say that she doesn’t want to work for Santa (she is played by Michelle Yeoh, better known as the mean, unrelenting mom on Crazy Rich Asians) (and also YAY FOR WORK REUNIONS BECAUSE I LOVE THEM even though she’s a total beezy in that film) forever, either. I mean, I personally would, but to each their own.

You see, Catarina (or Cate, as she desperately wants to be called) cannot figure out how to turn her life around or who she even really is. She is a continual screw-up. Her sister is the shining star. They can’t stand each other because they both think the other gets more attention (sounds about right, right?). She has a fledgling relationship with her mother. They are a family of immigrants. I can relate with so much of it. Well, minus the singing. I mean, I do it anyway but I don’t sound angelic like she does. Maybe I should move my eyebrows more. I digress.

Tom slowly helps her regain some confidence, reminds her how to see people (but like, really see them), and to stop taking your village for granted. He refuses to be a slave to his cell phone. He asks her to eat better. He volunteers at a homeless shelter and takes her there to see it on their “second” date. There are mental health struggles, poverty, racism, lack of accountability, struggling relationships. Even when it is being cute, the film stays pretty true to a real world out there.

As Catarina begins to find her gumption and her drive, she starts to make some selfless acts. She stops being selfish and in that process, begins to find healing, both in her, and around her. She doesn’t need someone to save her or love her. She needs to do both of those things for herself, because you are the only person you can rely on one hundred percent for those things. Tom teaches her that, too.

Is there romance in this movie? Yes.

Is there comedy? Yes.

Is there almost every single George Michaels song in it? ABSOLUTELY. Get ready to sing along.

You also walk away from it with a renewed hope. Not just on Christmas, when we are most likely to reach out and help people but, in people, in general. This movie reiterates that with kindness we can break down walls, because we never really know what people are going through. We all have battles we are fighting. And the best love story is when you begin to love yourself.

And if you have a beating heart, you will love this film.

I just know it.

I don’t own the rights to this photo.