Aka – How to be a little better every day, with practice

Oh gosh. You did it. You clicked on this post to read my ideas on how to change something in your life, for whatever reason, because either you wanted to read this saying, “YOU DAMN HYPOCRITE,” and madly hit the X in whatever upper hand corner it appears in. Or because you think I deserve to give advice to anyone. Or maybe you’re just bored and it’s midnight on a Tuesday and you’re desperately crossing your fingers that this will be boring enough to put you to sleep.

All I’m doing is making a list of actual shit I’ve at least acknowledged as negatively affecting me and maybe that is the second step to fixing a problem. Or going to rehab. You never know!

First, put your damn phone down

Yeah, yeah. I don’t even need to explain it. You’re not continuing reading this thinking I’m going to give you some outrageous statistic that bitch-slaps you into realizing that by holding your phone, you’re holding hands with the devil. No wonder it’s called Apple.

I’m just saying, consciously recognize where your time goes. And if you’re one of those friends who thinks you don’t have a phone addiction, go ahead and pause your reading, go to screen time in your settings, and then think about whatever number of literal hours you see listed there. We can do better.

But don’t put it down yet. I’ve got more gems to share. And this is not permission to never respond to people’s texts or phone calls. FIND THE BALANCE!

Side note: my wife tells me to put my phone down a lot. Like, a lot a lot. I like to share our daily funsies but I think I’m getting better at choosing what and when and deciding when to put it away. With that said, nobody else tells me when to put my phone away and gets away with it. Not even my mother. So don’t even.

Second, listen to listen. Not to respond.

Yeah, it’s tough. I see it everyday. You ever feel like you’re talking to someone who just is not.hearing.you and you are getting frustrated? Well, brace yourself. Chances are, you have done it, too. I participated in an activity at a seminar once that I’d like to share. It’s pretty easy. Fairly eye-opening. You just need a counterpart. This helps you practice being engaged and active as a listener, which is essential for having real conversations. <– you know you’ve been a part of conversations that were really just someone else soliloquizing to you. Don’t front. Anyway, here is how it goes:

And if you don’t have anyone to practice with or are scared to ask because this is your first time and you get nervous, reach out to me. I’ll practice with you.

I know plenty of people who did or want to rid themselves of the social medias. Now, if you really want to, by all means. If you prefer one over the other, nobody says they’re beanie babies that you need to have a whole set of to matter. But if you’re just wanting to delete them because everything you’re seeing is negative, depressing, mean, etc, then it is time to evaluate who and what pages you are following. You are in control. I want to add that I also think it’s worthy to leave one or two sources of contention on your page so you aren’t oblivious to the stupid shit people say and do, but that’s just me. You do you.

Listen to the memes

Here is what I mean by this. I recently saw a quote (I know, they probably aren’t actually called memes. I’m just referring to the photo you can save that has inspirational ish on it, funny photos and odd captions that make you LOL, etc. I can call it what I want. You call it what you want), that said something to the effect of, I want to sit at tables that I’m not the topic of conversation of when I get up.

Dang. Can I get a HELLLLLLL YEAAAAAAH. Shitballs. That hit me like my fourth shot of tequila! I legitimately fist-pumped the air and felt instantly fired up! Who doesn’t want that? I mean, I was about to throw on my power hoops and my fave lipstick like it was a damn lava flower! You know, the one Super Mario eats? Watch out, lava balls coming your way!

Except, I also took a moment to think about the flip side, because being 37 can do that to you. Here you are aging, and also maturing! It’s the tits. When I reflected, I realized I’ve talked about people who have gotten up and left the table. Now, maybe my table is shorter and not full of directors. Yet. That doesn’t matter. I’ve still been guilty of this.

You hate excessive meetings? Don’t hold one after the initial one is over. You don’t like gossip? Don’t engage. Or better yet, say that. Literally say, “This conversation feels gossipy and I’m working on not doing that. I’m going to step away.” And I know that is awkward. I know it calls some people out. But damn it, I’m done tiptoeing around the boundaries I need to establish to make myself feel healthy. I empower you to do the same. And if you’re sitting there about to pop out of your damn chair because I’ve done this exact thing with you, just know this.I KNOW. I AM A HYPOCRITE WHO HAS DECIDED TO BE BETTER. Alright? Good.

Don’t be that person who makes everything about yourself

There’s one thing about connecting with someone, which is empathetic. There’s another thing about making everything about you. And maybe you’re feeling called out right now. Well, lace that sneaker up and get close because I mean what I am about to say. This is important. And I don’t say this maliciously. I’m bringing awareness to it because you are still reading and maybe this might help. Chew this over. Think about it. And ask yourself the following:

Person A: I feel crappy today. I haven’t pooped in a couple days. **Oh shit, no pun intended! Twice!**

Person B: I am so regular. I poop every morning.

Side note: Yes, I am always person B here. I KNOW!

Person A: I can’t believe Carol got that promotion over me.

Person B: I get skipped all the time because I refuse to play the politics, too.

Person A: I cooked some amazing fish and chips last night! I am so proud of them!

Person B: Oh, we make fish and chips all the time. They’re so easy.

See? What I’m saying is, sometimes, let up on you and be about them. Don’t be a B. I’ve practiced this a lot and let me tell you, it now stands out to me like a sore thumb (who came up with that? I’ve never really noticed anyone’s sore thumbs before), and I almost want to apologize (in fact, I think I have) on behalf of person B to person A before. It isn’t pretty.

Take note of what isn’t working

This is one piece of advice that sounds easy to me but isn’t, in fact, easy to me. I love to say yes to the fun stuff. The wifey likes to plan ahead. Turns out me wildly agreeing to shenans all the time is probably giving her high blood pressure. When you say yes to something, you are saying no to something else. That’s is what Shonda Rhimes taught me and while I still haven’t forgiven her for killing off Derrick, I see what she is saying. I AM WORKING ON IT, so you go work on it, too.

I’ll forever say this. If you know something makes you an ugly person or someone impossible to deal with, be it alcohol, video games, the political shit-show that is our country, instagramming your life, having your phone out all damn day, etc then MAKE.A.CHANGE.

Never let anything hold more power over you than you yourself hold. You’re too beautiful for that.

And last but not least…

When you can, be there. For the rallies. For those who need backup. For the hard fucking conversations. For when people are fighting for their life or saying goodbye to it. For when moms need their damn village. For when we need someone to show up and just sit uncomfortably with us without judgement. Show up for who is important to you.

And when you need someone, tell someone. <–That’s the hardest thing for me so if that sentence alone makes your throat squeeze shut tightly, I feel you. Let’s figure out how to ask for help also be willing to accept it. And let’s also figure out what isn’t working. Not for just those around us. For us, too.

Let’s do it together. 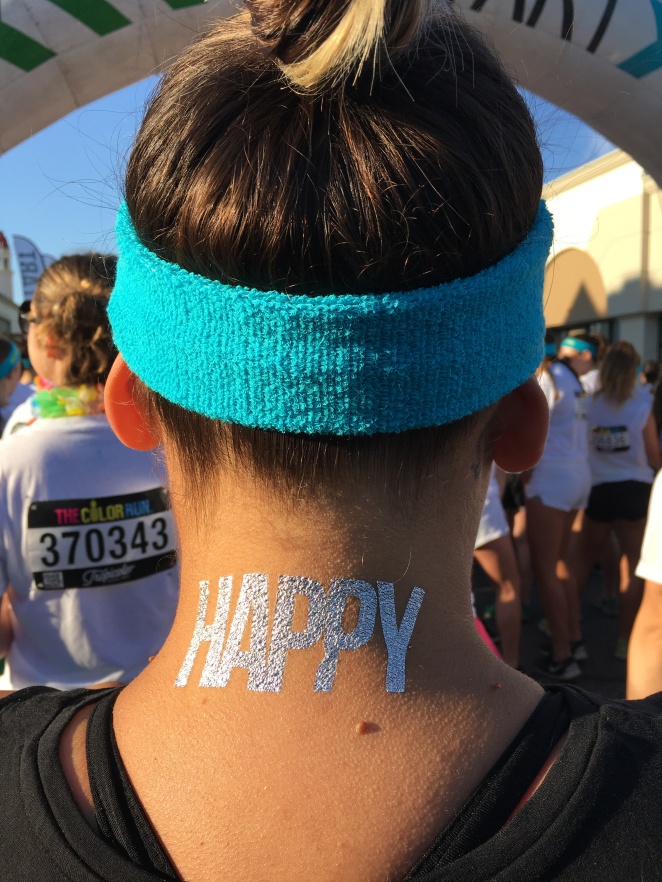