You might wonder why I took a hiatus from writing. No, that’s not quite true. See, I don’t think much about what exactly I’m going to write and rather I let the words come to me. Many a posts were written lately, all in my head, where most of them begin. They just never made it on my blog, because they were either too much of one thing or another. I wanted to write about love on Valentine’s Day but then there was a school shooting and I was heartbroken, unable to find words that would do any of the seventeen lost souls justice, except there were many, all strung together in my head in a jumble of sadness and anger. I read so many calls to action, so beautifully written yet I felt paralyzed because I don’t know what to do or how.

And then there were the conversations about the shooting, with friends and family and our boys. How could I share some of the most raw, irritating, frustrating conversations with all of you, who are out there having your own? And then when fun things happened, how do you share that, when our nation (well, most of us) is mourning all the children who didn’t come home after school because of other children who took a weapon into their own hands and made a safe place a nightmare? 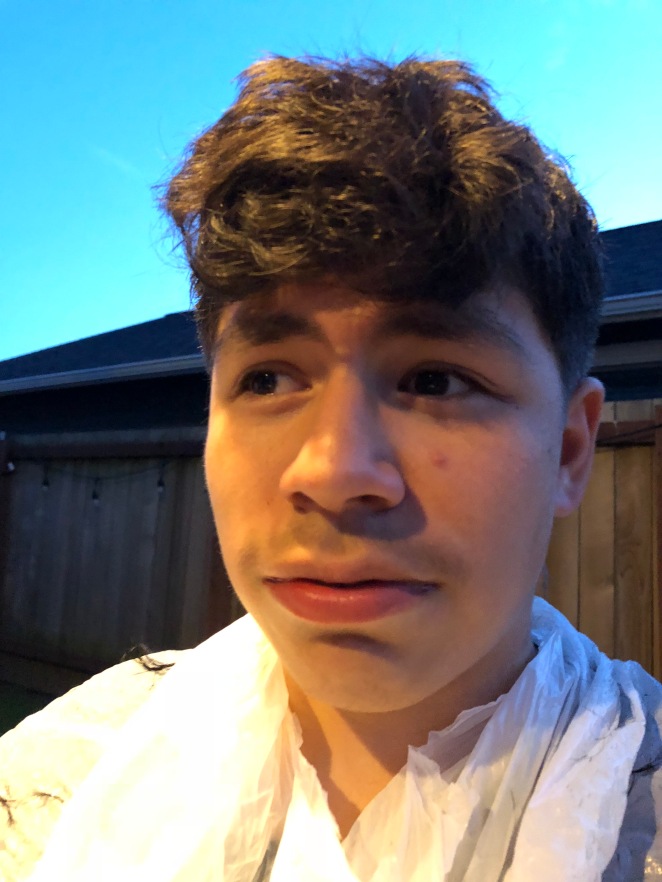 The #meanager, who we remind daily that he has much to learn

Alex, a trombonist, who could have been my Sam. Sam, who didn’t participate in any of the walkouts for reasons I can’t understand. Sam, who spouted second amendment words to me that made me want to scream. He has been so mature of late and then we disagree on this, on the issue of gun control and I wonder if we picked the right town to live in. Except, whose town is really safe? Are any?

I read this book years back by Ishmael Beah, A Long Way Gone, which is a memoir of this poor boy’s time as a child soldier in Sierra Leone. Little babes stolen from their families and told horrible things to make them angry, given drugs and forced to shoot their friends to see who is toughest. They are handed rifles and in my mind they are AK-15s because that makes sense to me. He doesn’t want to kill. He knows it’s wrong. Yet his is a story of survival in a country going through civil war, where adults are using every resource they have, which is an abundance of children.

I read an interview by Suzanne Collins on where her inspiration came from for The Hunger Games and she spoke of not being able to sleep one night and flipping through the channels and landing on a documentary  about child soldiers. I imagined she was learning of Ishmael and the horrors he went through. The effects of war on children is where THG began. Young boys and girls, forced to do unspeakable things. Forced.

Moose, who we remind daily to be kind and show love to people

My mind flashes back to a regular morning with Moose. I’m driving him to school and it’s the morning after the Parkland shooting. I ask him what he does if there’s an active shooter at his school and he answers me so casually. It was as if I’m asking him if he enjoys math over science.

“I would hide. We learned to hide,” my son replies in all his nine years of age. “Where would you hide?” I have to ask this. I have to make sure it makes sense. He spouts out different places, mostly supply closets. That doesn’t feel safe enough to me, but you know what? Neither does school, in general, now. I question him about where he would hide if he’s on the playground, expecting him to have to think about it for a minute or two. He doesn’t, though. They’ve gone over this, too. I don’t find that comforting, friends. Except, I do in a way. A guilty way.

Abraham, who is so brave and learning to do him, regardless

A heartfelt conversation with Abraham, the 11 year old, wise beyond his years. He is a lover, more emotional than we knew how to handle for a while there, who participated in the sit-downs (they weren’t allowed to walkout in middle school, but were allowed to go to the gym). “What made you want to join in?” we asked him, because we didn’t expect it. “I want to be safe in school and I feel bad for the students who went through that. I don’t want to be bullied or afraid.” Me, too, boo. I don’t want any of those things for you, either. We applauded him. Gave him some high-fives. I’m not saying I was more proud of him than Sam, because they are equal but not the same. Abraham identifies with some of these concepts, as he has been bullied and made fun of. He beats his drum to a different beat, regardless, but it hasn’t always been easy for him. Sam is challenging us and forcing us to think harder and longer about our words and our expectations.

What are we expecting of our children? What are we teaching them with our words and our actions? How are we raising our boys, who see violence glorified in so many ways, with so many avenues? The #meanager mentioned he didn’t feel the need to walkout and demand gun control because it didn’t apply to him. “That won’t happen in Ferndale,” he has the gall to tell me. Except, a few short weeks later an email from his school district was sent to the parents to explain that a student had been arrested two days prior (which has me all kinds of fired up in a totally different way), because that student had brought a firearm to school and waived it around at another student as school was being released. That won’t happen here, MY ASS. I would be naïve, we all would be, to think any of us are safe.

DVSAS had it’s annual Victory Over Violence luncheon last month, where an informative, engaging conversation was had about gender norms, roles, and expectations. Many times, without meaning to, any one of us is perpetuating it. Ever since that lunch I have been thinking about my words and how I speak to my boys, because talking about it and being aware is how change happens. And you know what I think the most? That no one has to agree with me. But we can all listen, regardless. Just in case we learn something.

This is how I feel about where we are right now. Even if we don’t agree. Even if you have the strongest opinions about guns and your amendments, which ironically, includes the first. I mean, I’ll listen, too. And work on little things, like not telling your boys that dolls or the color pink are only for girls. Or gifting play kitchen-stuff to the little ladies in your life, because they are more than soon-to-be housewives. All I’m saying is think about your ideas of gender roles and consciously make an effort to disrupt that thinking and begin spreading that change. Show your mini-men love and kindness, show their boy pals the same, because we don’t know what happens behind any closed doors and you might be the catalyst for them to grow up better.

We can do this, friends. We owe it to our littles.